Join the Justice Ministry as we move boldly from head to heart about race through critical self-reflection and courageous conversation. This is an invitation to a spiritual journey toward personal and collective commitment to work for racial justice.  Five, face-to-face sessions will be held at SEUCC on Tuesdays, February 18, March 17, April 21, May 12, and June 16, from 6:00 p.m. to 8:00 p.m.  Between sessions we will hold virtual discussions based on selected readings and video.  Space is limited and all participants must attend the February 18 conversation. Click here to register.

Cleveland’s history of racial injustice has lasting impacts.  But God’s hand is on the city.

A discriminatory founding: In 1802 at the state Constitutional Convention, delegates from northeast Ohio had no concern for the rights of Negroes, and the document that emerged was a white man’s document. Slavery was excluded (by a single vote!), but blacks were denied the right to vote and declared ineligible to hold public office or to serve in the state militia.

Historically diverse neighborhoods destroyed: By 1860, the center of Cleveland’s black population lived the old Haymarket district. Blacks were concentrated there but the area was thoroughly integrated. Cheap housing made the area attractive to impoverished immigrants. Italians and Slavs were the majority but in 1870 the area was home to people from 40 nationalities who spoke 14 different languages. Between 1920 when work started on Terminal Tower and the 1950 start of Innerbelt construction, all residents of the area were forcibly displaced.

A history of exclusion: Prior to 1900 the city grew spatially by annexing nearby towns and unincorporated areas but in the early 1900s eastern suburbs of Cleveland Heights and Shaker and Garfield Heights refused annexation and gained population at a higher rate than the city proper. Few blacks were able to join the exodus from the city. There were only 15 black families in the 3 named suburbs, 10 black families in East Cleveland, 6 in Euclid, 3 in Lakewood, none in Parma.

In the city during the first wave of the great migration in the first half of the 1900s, the housing shortage for blacks was at crisis proportions. Boarding and rooming houses were packed, some newcomers were living in old railroad cars, abandoned buildings, shacks, and tents. The Local Urban League verified that one black family was paying one third more rent than a white family in a similar unit in the same building. Landlords openly took advantage of newcomers, raising rents 25 to 75%. The Chamber of Commerce verified that blacks paid 65% more than whites for comparable housing.

A flash point in Hough: Looking at Hough, the 2 square mile residential section, annexed in 1872, was a fashionable section of the city until the depression. After that, it became a working to middle class white neighborhood. Hough changed from 5% non-white in 1950 to 74% non-white by 1960. Blacks moving in inherited conditions that were already badly deteriorated. By 1936 only 36% of Hough residences were owner-occupied. Deferred maintenance, doubling up renters, taking in boarders, and absentee landlords had become the norm in the area before so called “white flight.”

Hough was the scene of now notorious riots that broke out in 1966 with violence, firebombings, four black residents killed and 50 people injured.  The stage was set for this manifestation of frustration and despair in the decades prior. Between 1940 and 50, Cleveland’s black population increased by 76% to 65,000 at the same time black removal (aka urban renewal) displaced over 20,000 blacks, most of whom landed in Hough. They had little choice. Piling people up in deteriorating housing and charging exorbitant rent was the order of the day. The outcome shouldn’t have been surprising.

The church cosigns on discrimination: In many parts of the country, the church supported segregation during Jim Crow – a century of American apartheid. After the 1954 Supreme Court decision outlawing segregated schools, Christian academies sprang up to shield white children from attending schools with black students. White churches abandoned the inner cities for the suburbs.

Lasting effects: We still live with the psychic residue of these prejudiced and discriminatory attitudes, and the scars of discriminatory policies mar our city.  Cleveland stands as one of the most segregated cities in the nation.  Our region’s black neighborhoods have higher rates of asthma, diabetes and high blood pressure.  Black babies are more than 6 times more likely to die than white babies.  There are nearly 12 times more black youth incarcerated than white, and life expectancy is 6 years shorter if you’re black in Cuyahoga County.

A changing tide: That said, there is undoubtedly a far greater awareness of race as a fundamental fault line in our society, and creative approaches to addressing it are emerging from many sides. It would be a mistake to discount them. Imagine the profound changes that would occur if all people of faith were to step up and speak out unitedly for racial healing and equity rooted in spiritual transformation.

“One night, the Lord spoke to Paul in a vision: ‘Do not be afraid; keep on speaking, do not be silent.  For I am with you, and no one is going to attack and harm you, because I have many people in this city.’”-

God’s vision for the city: In Acts 18:10, God speaks to Paul in a vision and says “I got a lot of people in this city.” God is talking about Corinth, a city that was not unlike modern American cities, not unlike Greater Cleveland – a place of culture and commerce and hope, ripe with divisions and inequity and oppression.

God spoke to Paul in a vision. Vision. To look, to see, to experience, to perceive. More than simple eyesight or hearing. Seeing and understanding. Visionary, prophetic seeing was rare in New Testament times, and it is rare now.

Our religious conduct has political implications and consequences. Our fundamental rights are not equally protected and can be taken away.  But God! God’s hand is on the city. It was on Corinth and it is on Greater Cleveland. God’s word to Paul is a word for us. Don’t be afraid. Don’t be silent. Participate in God’s work. Be faithful in the city. God’s eye is on the city. The city is sacred space where God’s work is being done. This word from Acts 18:9-10 is full of hope, purpose, and promise. God has a lot of people in this city. In spite of all the bad reports, God is in the city. Don’t you think God would be pleased for us to help with the healing? I do.

“Dad I’m not going to make it here. I’m going to go crazy. You got to get me out of here.” This was the last time Johnny Kiekisz would speak to his family.  He was calling from Cuyahoga County Jail after being arrested for failing to show up to court to address a misdemeanor ticket he got for panhandling (cleveland.com).  Days later, he died by suicide.  Kiekisz is one of nine people to die in the Jail since last year.

When police pick up someone struggling with mental health or addiction issues, usually for misdemeanors like loitering or urinating in public, they can take that person either to the psych ER and wait, often hours, for them to be seen.  Or they can take the person to jail, with potentially severe repercussions to their mental health.

In 2016 Greater Cleveland Congregations (GCC), a coalition that includes SEUCC, toured the Cuyahoga County Jail and did research on how to improve conditions there.  Since then, the group has been pushing for a pre-booking mental health and addiction crisis intervention center, where police could take people to get appropriate treatment instead of jail. It is estimated that pre-booking crisis intervention centers can reduce the booking of mentally ill and/or addicted individuals by up to 80%, vastly reducing contact with the criminal justice system as well as the need for so many jail and prison facilities.

Crisis Centers have already been successful in reducing the number of people in jails in other places.  For example, in Dade County (Miami, Florida), a diversion model that has diverted over 4,000 mentally ill and addicted people from the county jail into treatment.  Dade County has literally been able to close a jail and rehab it into a treatment center.

In Bexar County (San Antonio, Texas), a coalition of stakeholders from the justice and mental health community came together to create the Restoration Center.  The Center includes a Sobering Unit, A Detox Center, and a Crisis Center that accepts drop-off by law enforcement. The Restoration Center has diverted over 100,000 people from jail and saved the county 100 million dollars over eight years.

The Coalition to Stop the Inhumanity is having a march and rally on Tuesday, October 8th. Meet at Public Square at 8AM and march to the Justice Center, then rally and hear from speakers at 9AM. Afterwards, the group will go inside to pack the 9:30AM Criminal Justice Council meeting, where they will provide testimony on critical issues that have gone unaddressed by the Criminal Justice Council. Join to raise your voice with the Coalition to speak truth and justice to power! Click here for Facebook event.

“He has told you, O mortal, what is good; and what does the Lord require of you but to do justice, and to love kindness, and to walk humbly with your God?” (Micah 6:8) 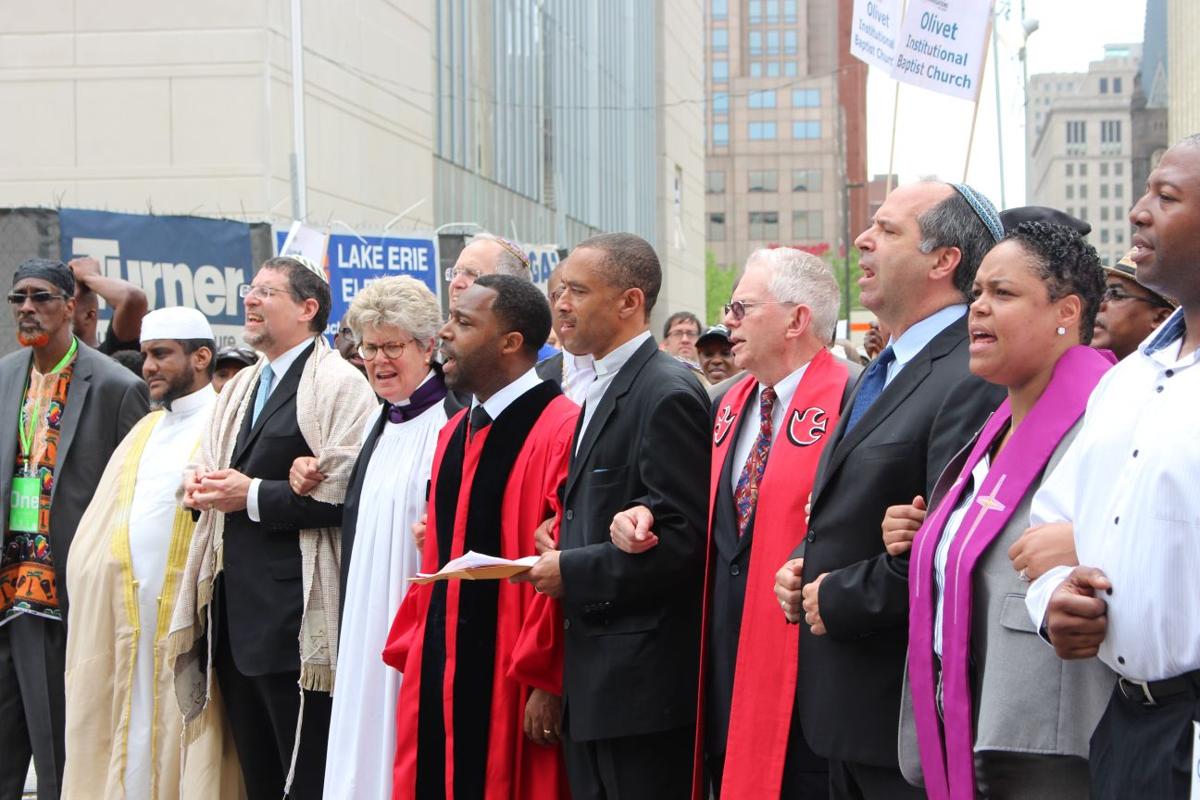 Pastor Courtney Clayton Jenkins of SEUCC and other clergy leading a march against racial disparities in the criminal justice system, May 2015. Photo by Lillian Messner

The pursuit of justice is at the very heart of our Christian faith, and the eloquent words of the prophet Micah, uttered so many centuries ago, provide the guidance we of South Euclid UCC need as we seek to be a faithful justice-seeking people.

With love as our motive and justice our instrument, we want to support those among us, near and far, who need our tender care and we want to help build a more just city, nation and world.

The Greater Cleveland area is facing a number of longstanding issues of social justice, rooted in a deep history of segregation.  While the Cleveland area is sometimes seen as a progressive enclave in a conservative state, policymakers have over a number of decades, failed to effectively address the crushing inequities related to, health, joblessness, education, access and mobility, housing, infant mortality, wealth building, safety, criminal justice, and virtually every other facet of public life.

Like much of the population in Greater Cleveland, we can sometimes be disconnected from the disparities affect our communities and from the efforts and avenues to change them. There is a sense of “injustice fatigue” created by the long history of injustices that have become a part of the way things are and have always been.

However, there is a new wave of activism bubbling up around Cleveland, and a new energy around the fight for justice.  Marches and rallies responding to the death of Tamir Rice and the Brelo “137 shots” case have lent energy to deeper campaigns to end overcrowding and human rights abuses in the County Jail, to fight ongoing neighborhood disparities in public funding, and to end racial health disparities.  In July, a massive effort of activist and community groups including SEUCC resulted in lead-safe housing legislation in Cleveland, a major step in the fight against the city’s lead poisoning crisis and proof that social justice movements can make change.